Since my last blog post, there have been several changes and decisions made, but all for the right reasons and all with a smile on my face moving forward!  Although it seems to be an all too short lived time here on the farm, several things have come up that have made me second guess being so isolated.  Job opportunities here and possibly at home, mixed with an itch too see more of the country now, in the even I am only here for a year.  I still have plenty of time between now and when I start teaching in Melbourne to complete my total of 88 days of regional work required for my second year visa, so I figure I will explore some more before committing myself to one place for an extended period of time.  I also have a fabulous opportunity to house sit, rent free, on the Gold Coast for three weeks, from mid December to early January!  It's in a place called Varsity Lakes, about an hour from Brisbane, Queensland.  How did I land this..?  Connections really are everywhere, and are fantastic to have.  There is a super sweet lady named Diane that works in London, who does wine and spirit in-store tastings.  She and I spoke often when she was in the LCBO I was working at.  I told her about my plans for Australia, and she informed me that her son Ron lives here and works here, and has been traveling around working for years!  She emailed me his information, and Ron and I have been in touch ever since.  Ron and his partner Trisha live on the Gold Coast, and are in need of someone to look after their house and cat and dog for three weeks while they travel!  I was notified of this even before I left Ontario, and kept it open as an option, and am now jumping on the opportunity!  I am really excited about it, and am looking forward to beach life and summer holidays on the coast.  Since it's summer here, all of the "schoolies" are traveling to beaches, so the coasts will be swarming with people and activity, so I will be in my element. 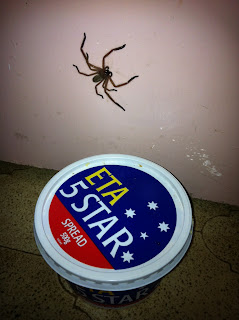 Now to catch up on the last week, since my last post! Time really is flying! Okay, so - spiders.  Not that I doubted anyone who had told me that spiders in Australia are huge. - but I saw my first "huge" spider, that I found out was actually quite small.  With legs extended, it would sit quite nicely in the palm of the average hand, with eight little legs stretching across your palm, with the body being about the size of a fat cut green bean - but hairy.  So if this is considered "small," I'm a little nervous about what big is!  I'm actually not terrified of spiders, no matter their size.  What makes spiders unnerving is that they are quiet, fast, and generally weightless in comparison to other things of similar size.  We see them in the house from time to time, but I'm okay with seeing them around... it's when I find (and haven't yet!) one in MY space... like my bed, or on my pillow, or in my bag, that I will likely scream or feel like they are crawling all over my body relentlessly.  Disgusting. 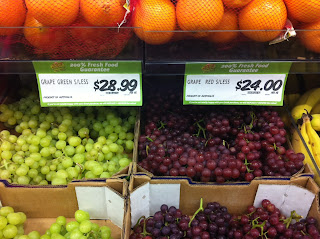 I mentioned last week how our shopping adventures go.  I added a picture of my most jaw dropping find!  What do ya think?  How much do YOU love grapes? :) We didn't buy any.  It's not always so outrageous.  It has everything to do with crops, availability, numbers, time of year, and where they come from.  Apparently a few months ago, bananas had a similar price tag, and are now pretty reasonably priced!

Also as mentioned last week, the girls here are just fantastic.  The picture shows the five of us currently here, and the nanny that just left.  Pardon my double chin and fabulous choice of angle for the picture.  Going clockwise from my face, you have Sunniva from Ireland (the nanny who left), Lisa from Sweden, (who is leaving next weekend), Laura from Italy, (sticking around for a while!), Stephanie from Reunion (sticking around for a while!), and Molly from Taiwan, (leaving next week).  It's been incredible getting to know these girls and form friendships with them.  We have such a great time here at the house.  Dinners and evenings are so relaxed and full of laughter! 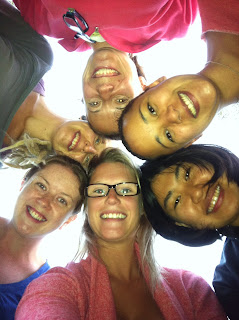 I FINALLY SAW REAL, WILD, KANGAROOS!!  We were taking eggs down to the cooling shed by work van, and Lisa spotted four in the distance - it took the rest of us a second to spot them, since they blend in so well.  They are like deer for us back home, so the locals could care less about seeing them, and they're a nuisance here like deer are for us... but I nearly lost my mind!  I was so excited, especially because to were large, one had a joey in its pouch, and one was a little small joey bouncing so quickly!  He was just moving so fast!  Ahhh, he was so flipping adorable. 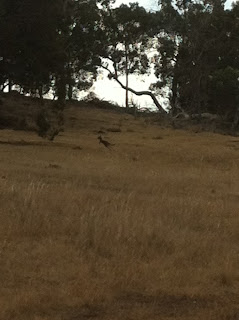 Another highlight occurred today! I drove! I took everything I've ever learned about driving a vehicle, and flipped it.  Literally.  I even made the wipers go trying to signal my right turn!  It was pretty funny, and made the girls laugh!  I'm thrilled that I have driving standard down pat, because that would have been half the battle.  I found myself hitting the car door with my right hand a few times looking for the gear shift, but managed to catch on quite quickly.  It sure is a strange feeling to sit, drive, and pass on coming traffic opposite to everything I have ever learned!  I got a warning about walking on the roads - BE CAREFUL.  Since a human somewhat resembles a kangaroo from a distance from behind, on a dusty road, drivers generally don't stop.  It's rare to find someone walking on these road back here so we need to literally jump in the ditch and not listen to our headphones if going for a walk.  I think walks on the beach might be more up my alley :)

Upcoming events include: three young fellas arriving from Sweden, France, and England.  Last night in the house as the group of four girls (the girl from Italy lives on the farm), and the last Saturday for Molly and Lisa!  We've just planned a nice night in together, with dinner and dessert, and it'll be really nice.  Next week, K is off traveling for a few days and her mom will be here to help me out!  Blog again soon!