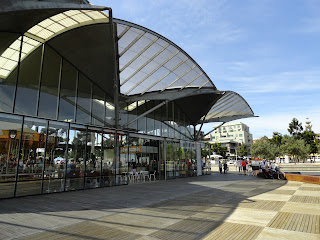 Hiiii! I am sitting here in my regular spot at Gloria Jean's while it rains outside, reflecting on my weekend! I'd love to share it with you all, since it was stellar! 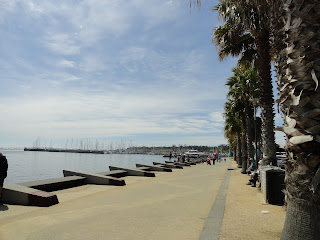 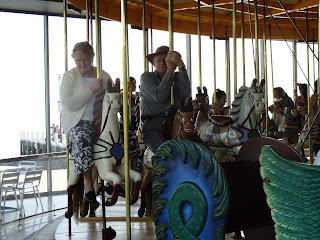 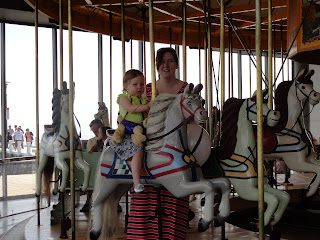 So I took the noon train to Geelong, which was lovely! Geelong is located south west about an hour by train or car from Central Melbourne, and the ride is very scenic, through country suburbs and fields and farms.  I had my country tunes playing into my earbuds and loved the ride! Kristen and her mom Gail and Kristen's youngest little girl Mackenzie were at the North Geelong station waiting for me, and it was such a great hug to walk into! So familiar and welcoming.  We met up with Kristen's Aussie husband Colin and her oldest daughter Peyton for some lunch and visits!  Her girls are both precious, and Peyton's skills on an iPad surpass mine!  She's TWO! I was thoroughly impressed!  She's a smart little lady, and her little Aussie accent won my heart.  Very sweet!

We went to the supermarket together, and spent the rest of the evening visiting a job searching for me! Haha! We had a great lasagna, caesar salad and garlic bread dinner, and then cake for Gail's birthday! Kristen hooked me up with an old phone here that I can use for unlimited incoming texts and phone calls. For $30, it is active for six months, and I have unlimited incoming everything! That's all I need for now since I now have a number to add to my resume and people can call me now! Perfect. I'll just keep chasing wifi for my emailing and blog entries. :)

Colin's parents stopped by for a visit later in the evening, and brought me a cot to sleep on which was great!  We were all in bed around 11:30pm or so, and up again on Sunday morning around 9am.  We got ready and loaded up and headed down to the Geelong waterfront for a huge brunch for Gail's birthday.  It was delicious!  You always try to eat your money's worth at a buffet, and end up in a food coma - but it was so worth it.  After brunch, we walked along the waterfront, and through a series or little market huts and displays that they have every Sunday in Geelong.  There is a carousel with old horses on it from years ago that have been repainted and fixed up, that still have the original horse hair tails! Peyton and Kristen took a ride while we watched.  There was a sweet old couple in their 80s that rode it together, smiling and laughing together - and I definitely caught a glimpse of true old people love! SO SWEET. There is hope. :) 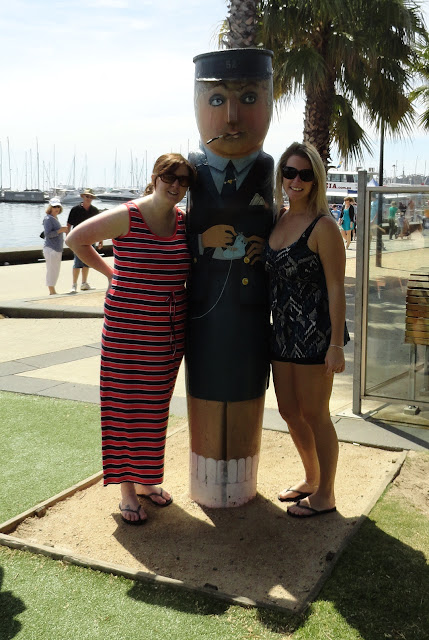 Along the waterfront in Geelong, there are over 100 "bollards" which have been made out of huge wooden pylons, many recovered from the Yarra Street Pier, which was destroyed by fire in the 1980’s and later removed. The wood was sculptured and then hand painted to depict many of the events and history of the Geelong region from the times the local Wautharong People were the only inhabitants right up to modern times.  It was pretty neat to see! Colin told me that they go on forever! So I guess I really only saw about 20 total out of the over 100 of them! They all tell their own story, that's for sure!

After the waterfront walk, we went to a series of outlet malls, and then down to Torquay (tor-key) Beach, which was lovely! Another site of the ocean for me = me very happy! :) Colin and Peyton made a sand castle, and I took a bunch of pictures and stood in the 15 degrees Celsius water! Brrrrrr! Still warming up after winter!

Still haven't seen a kangaroo or a koala yet - but you'll all know the instant it happens... this I promise! Apparently there are several areas around here where they can be seen.  I am obviously on a mission to find them.

I still haven't gotten used to the driving on the other side of the road yet.  Or the fact that the vehicles are flipped and you drive on the other side! Kristen has mastered it, that's for sure! 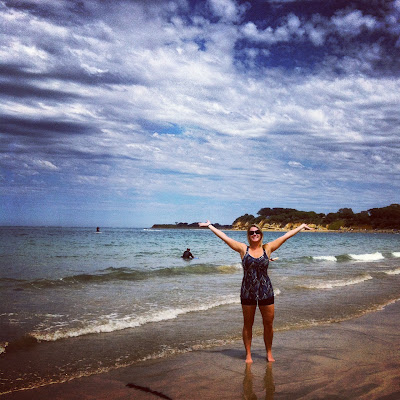 The day tired us all out, and we spent the rest of the evening relaxing and visiting and then played some Scrabble and Sequence, which got competitive! It was a great night! We were all sleeping by about the same time as the night prior, and up around 8:30am on Monday morning.  We all had breakfast together, and then Peyton got ready for daycare!  We tidied and chitchatted for the morning, and just after noon, I was delivered to the train station for my ride back into Melbourne.  Sad to say bye, but so thankful for a great weekend of friendship and hospitality! Thanks again Kristen, Colin, and Gail! 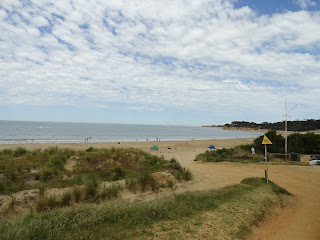 Upon my arrival into Melbourne, I made my way to the YHA Melbourne Central and checked in. I was able to meet up with my friend Melanie from Nipissing, who is here teaching through ANZUK - the company I'll be teaching through in April when work picks back up for contract supply teachers! Mel and I always have a blast together. She's a riot and has one of the most contagious laughs of anyone I know! We met up with some other Canadian teachers (who Mel knows through ANZUK) in the basement/lounge area of the building where they live, and watched the Australia version of Big Brother!

We had snacks and "girl time" which was great to just get lost in random conversations! I made my way back to the hostel around 9pm and was in bed reading and sending a few emails shortly thereafter. 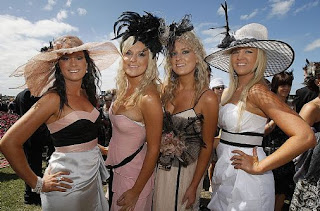 Today is the Melbourne Cup. Like I mentioned in my previous blog entry, it's a huge day here in Melbourne! You should see how elaborately people dress for this weekend and this event.  It's pretty neat! Apparently I'll be going with Rocco next year, which will be a hoot. It's tradition for the ladies to wear fascinators on their heads for show, as well as fancy dresses and flashy heels.  The city is absolutely swarming with fancy people right now! What an interesting atmosphere.  (I have asked people which babe is me... Look as hard as you like, I'm not in that picture! Haha!)

I know it's early in my "year" here, but in a nutshell, I know that I will want to stay for a second year, come next October when I'm right in the middle of teaching and living in Melbourne.  NOTHING against home, and EVERYTHING for experience and life. However, a "holiday working visa" which is what I have now, is only valid for one year upon entry of the country.  Therefore, I am valid in Australia until October 30, 2013, and can exit and enter the country as often as I want within that year - as long as I'm out by October 30, 2013. There is an extension possibility. The extension can be applied for if you complete 88 days of farming/mining/fishing/harvest work, and can be done whenever in your first year.  The reason I am jumping on this opportunity now, is because come April, I will be right into teaching in Melbourne and will not have the chance to do the extension work in the even I do want to stay another year to teach and work here in Australia.  So I figure if I can get the extension done now, I will be golden come next October when I want to continue teaching and working and will not be scrambling to get the extension work done!  Planning ahead!  I have been applying for all sorts of jobs, so we will see what comes up!

I may hop on a plane this weekend/weekend to Perth to tour around there and continue the job hunt.  I will keep you all posted with my movements and job news! Keep your fingers crossed I land something soon!