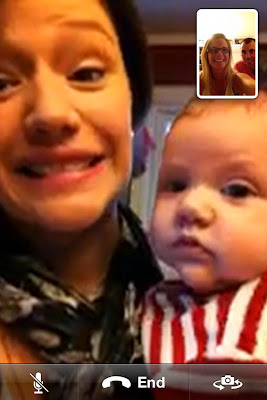 Christmas is over? Tomorrow is New Years Eve? Where is time going…? Anyone…? I can’t believe it!  Alex has already been here for five days, and his company is great!  We’re having a blast, and have already done so much, with a full agenda until the 8th when he flies back to Western Australia. 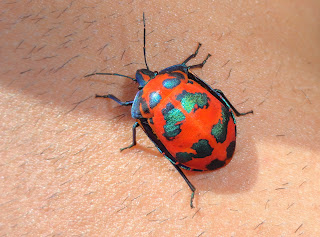 Christmas Day was strange, as I had anticipated.  It was quiet around here, and my package that I’d been hoping would arrive on time did! – and apparently there are another few on their way!  EXCITED!  I called home, and spoke to my parents briefly before calling Mama and Papa.  I opened the package that arrived from Mom in the mail, and amongst my surprises, got a really cute Pandora charm for my bracelet.  It’s a kangaroo and there’s a little joey in it’s pouch! – I like to think it’s my Mom and I dangling off my bracelet! Thanks Mom! A few quick calls home, and then got my day underway.  I walked the dog, then tidied the house, feeling like I was doing circles, anxious and excited about picking Alex up from the airport.  I made the earlier train, and waited at the airport.  I finally found him around 7:30, and we headed back to Varsity Lakes by train.  We skyped his entire family and then called my parents and Mama and Papa again for a quick catch up on the day! 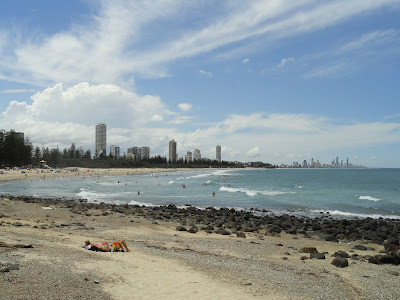 The fifteen hour time difference between home and here meant skyping and talking to my family on their Christmas Day would have to happen early on Boxing Day here.  We got up at 6:50am, which was so worth it, as I was able to see my family and cousin Inga and Mama and Papa!  It was incredible… Seeing little Kinley’s face made it hard to be so far away.  I did pretty well with the tears, trying hard to keep them in, only letting a few shed when I saw Kinley and then when my Dad appeared on screen.  It’s surreal being so far away, and having to regard a time difference so great in order to communicate with those you love the most.

The weather wasn’t great on Boxing Day here, and with Alex’s travel the day before, we took it easy and had a pretty quiet day.  We watch a few movies and had some Mexican food I made for dinner. 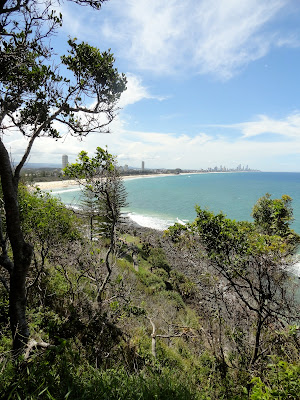 On the 27th, we got up and walked the dog before making our way to the beach at Burleigh Heads where we spent a few hours soaking up the sun!  You can see the picture of the big red beetle that landed on the back of Alex’s neck while we were waiting for the bus to come!  It could be about the size of a quarter.  There were a few others on the tree, that were the same red or a shade of orange.  There were also a few shiny blue beetles in the tree’s fruit.  The vegetation and wildlife here is always so colourful and eye-catching!  We definitely did our “heroic” deed for the day!  While laying on the beach, a sweet little girl, roughly 2 years old, walked by us and stopped to look at us.  We just said hi and then she kept going… Alex and I asked each other where here parents would be and we kept an eye on her – for a long time, while she wandered down the beach aimlessly.  We weren’t sure if the people she approached were her family until she’d quickly turn from strangers (who initially looked like people she recognized based on her reactions). 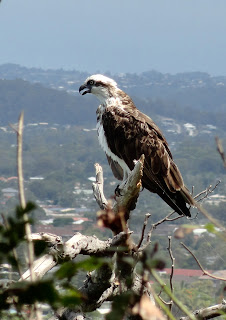 I got pretty uneasy about it, and when she was nearly 350 meters away.  Alex stayed put in case someone came by asking if someone had seen a little girl, and I took off down the beach after her.  She would have been over half a kilometer down the beach by the time I reached her!  I calmly just got her attention and asked her where she was going – knowing she didn’t have a response. 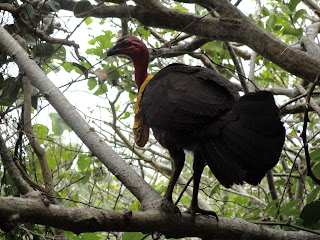 I picked her up, and the sweet little thing just clung to me, terrified and exhausted.   I turned back and was going to bring her back to the vicinity where Alex and I were, and then to the Lifeguard Tower that was within 20m of our spot on the beach – hoping someone would claim her as theirs!  Upon my return, the lifeguard beach truck came by and asked if she was mine… I told him she wasn’t, and asked if someone had reported a missing child. Nope. SERIOUSLY?! He told me he was just following her to pick her up and bring her back to the tower.  I hopped in with him and we tried to get a few words out of her, but all she could get out was “Mom.”  Poor little thing… This little boogery nosed sweet heart, that was latched onto me and was nearly asleep with fear and pure exhaustion when we got to the tower.  What made me nearly flip was when we returned.  A dimwit woman was standing there, as calm as could be, with what looked to be her sister and her sister’s child.  She simply said, “oh, she belongs to me.”  Then came out with, “well don’t you look happy?” – Didn’t thank me.  Didn’t thank the lifeguard.  Took her child out of my arms and walked away.  I was lost for words, wanting to lose it on the mother, whose daughter could have been abducted or dragged into the sea by the strong riptide.  I just walked back to where Alex was and tried to let it go, with people asking me along the way if she was mine…?  I couldn’t believe how many people watched her without doing anything, especially those who said they’d been watching her walk around aimlessly in the area we were in, for 10-15 minutes prior to her even heading down the beach.  Unreal. 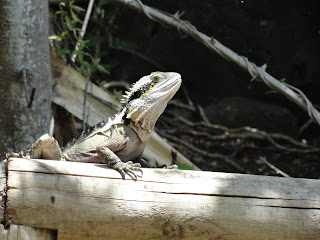 While swimming, we saw a huge jelly!  It would have been the size of a basketball, and was a deep blue colour.  Alex nearly swam into it without seeing it, and was pretty happy he missed it!  We got smoothies before heading home to walk the dog and called it a night watching a few Zeitgeist documentaries. 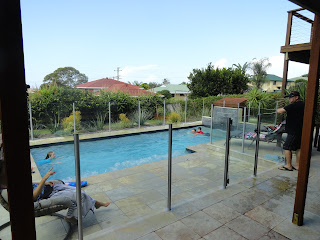 On the 28th, we went back down to Burleigh Heads, but instead of the main beach, we went to do a rainforest walk and end up at a “secret” beach (that nearly 500 other people were at! – sooo secret!) It was lovely though.  We saw geckos and brush turkeys, a few bearded dragons, and an eagle! (pictures!) It was awesome to see some of the east coast wildlife and rainforest.  You can see in the one picture, the beach that extends and has Surfers Paradise in the far distance. 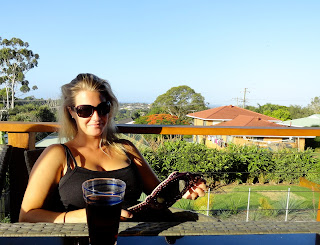 On the 29th, we were picked up by Phil, who is a friend of Alex’s brother Adrian.  We brought Athena with us, and headed out to Tweed for a day by the pool, a barbecue, and an overnight! Tweed is just over the border of Queensland and New South Wales, and there is an hour time difference between the two states!  Phil’s wife is Nicole, and they have two children, Max and Emily.  They have a beautiful house on a big hill in Tweed, with city skylines and the ocean in view.  It was fantastic, and their company and hospitality was so appreciated! We are going to see them again on Friday night for dinner and a night out at a comedy show, if all goes as planned. 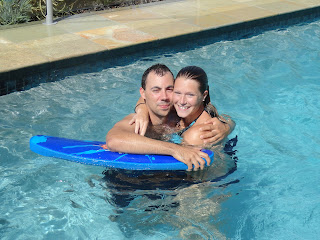 Today we got up and had breakfast, then walked Athena and spent some time by the pool.  Phil and Nicole have lent us a car until next Sunday, which is incredible!  This will allow Alex and I to not only get around the Gold Coast much more easily, but it means we can do all the things we’d hoped to be able to!  We’re actually sitting here now planning out the rest of our time here, lining up a few mountain walks, scenic hikes, and surfing days.  Looking like a busy week and a half ahead! 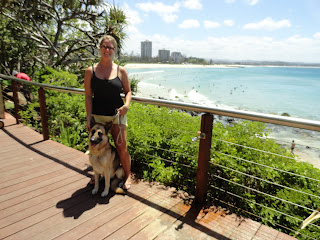 So today after leaving Tweed, we headed back up the coast, and stopped in Coolangatta for some lunch and a coastal walk with Athena.  The beaches here, as I’ve said already, go on and on and on.  The scenery here puts you in absolute awe of what is in front of you.  The ocean’s colours and shades of blue and green and aqua are incredible.  We made our way up to a lookout called Snapper Rock and took a few pictures then headed back to the car, and then headed home for a quiet night.  The sun and the pool and the walks tuckered us out! – Can’t complain though!  Seeing what we’re seeing on a daily basis, we are lucky bums! 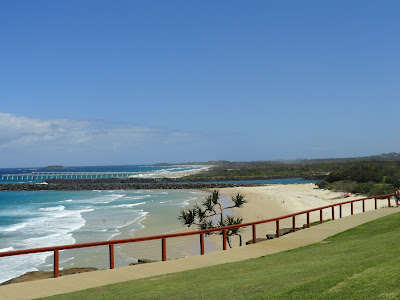 Off to bed for the night.  Calling it quits pretty early, gearing up for Springbrook National Park and a wild 5 hours hike tomorrow!