I booked my flight to the Gold Coast!  Time really is starting to fly… Christmas and New Years are right around the corner!  I’m in Fremantle, staying at the Old Firestation Backpackers Hostel, in a 14 person dorm, loving it!  Like I said, I never thought sharing a room with that many people would be my thing, but now I don’t even think about it. 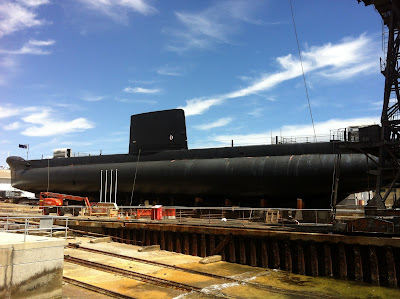 Some of the hostels around here do something fantastic for backpackers: they take calls from locals that need work done.  This could be anything from babysitting or dog sitting, to construction, painting or shingling roofs.  Most of the jobs are just quick cash jobs for a few days here and there, while others are paid and taxed jobs.  You’ll occasionally hear an announcement over the intercom about a job, and then you can just go to the front desk and get more information about it and get the number to call the person who needs the work done.  I landed one for four hours on Saturday and six hours on Sunday at a carnival here in Fremantle.  We met up with Johan last night at our hostel and filled out the paperwork for the job this weekend.  It’s called MONSTERBALL.  It’s a great way to make some quick money while you’re traveling.  Great way to fund your travels!

I met up with Molly (the girl from Taiwan that I met on the farm) for an afternoon, and we walked around the harbour behind the hostel and then around to a beach where we just relaxed and talked.   While venturing around the harbour, we came across a huge submarine! I’m talking HUUUGE!  There were tours available, but it was closed that day. Go figure.  So we ended up having a rea;;y nice night, as Julie (Lisa’s boyfriend Matt’s mom) invited Molly and I over for dinner!  Julie picked the two of us up and took us to their house.  Home made Italian raviolis and beef/tomato sauce, with side Caesar salads.  Dessert was homemade tiramisu!  What a treat!  I even got to bring some home for later. Win!  The Sticca’s are such a beautiful family, and are so pleasant to be around.  I haven’t met the two youngest boys yet, as they are on vacation, returning to Fremantle tonight.  I hope to see then all again before I head east on Monday!

On Tuesday night, the large group of Italians that are staying at the Old Firestation hosted a huge pig roast behind the hostel. Lots of music, drinks, and laughs. 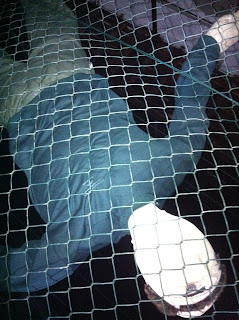 I went on a really interesting tour of the Fremantle Prison the other night! I went with Marie from France, and Roxanna from Holland. It was a 9:45pm tour, done all in the dark, with little souvenir “torches” (flashlights…) for everyone.  The prison is within walking distance from the hostel, as most other things are in Fremantle.  There were nearly 30 of us there for the tour, the two youngest being 11 and 12 year old boys.  Some of the comments they made throughout the night were pretty funny, including calling a tall thick Irish lad a pussy!  The prison tour took us through the history of the making of the prison, the main cell block and hallways, the area of solitary confinement (which was a little unnerving!), the whipping post, the gallows and the morgue. The guide shared stories about some of the convicts, and there were even times he’d really make us jump by kicking a steel door behind him for emphasis during a story, or by yelling mid-sentence!  There was even a dummy that fell from above, landing in mesh above our hears with a loud scream, that made us all duck our heads pretty quickly!  Alex (mister handsome from England) warned me prior to the tour to look out above – which I would have had no idea what he was talking about until that very moment.  At another point during the tour, the guide let us into one of the solitary confinement chambers in small groups – and with one group of us, he slammed the door shut and turned the lights off!  Of course I was in this group, and I personally found it rather exciting!  The claustrophobic woman in there with us didn’t, and screamed at the top of her lungs for him to let us out!  There was one hall of open cells, each showing a transition of how the rooms changed over the years at the prison.  You could walk down the hall and peek into the rooms.  A few of us joked that the bunk beds resembled those we’ve been sleeping on at the hostels we’ve been in!  Feel free to check out the website for the prison! http://www.fremantleprison.com.au/Pages/default.aspx 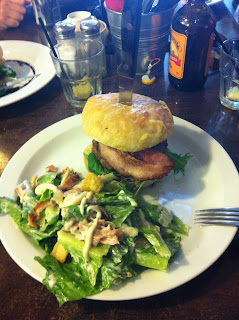 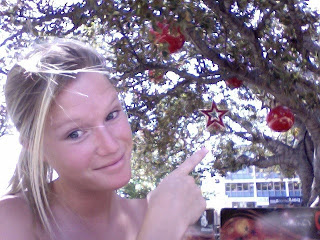 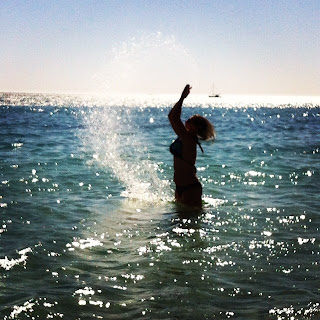 The weather went for a pretty wicked heat wave over the last two days - around 37 degrees, but extremely humid, making it uncomfortable and literally unavoidable.  There was one place you could escape it… a nice swim in the ocean!  I just love the sea.  A bunch of us went for a later swim last night, so we could all watch the sunset.  Quick dip and another Indian Ocean sunset? Yes please!  One fella that was with us was unfortunately stung by a jelly fish!  I am so happy it wasn’t me… I hate to say that an incident like that would likely taint my love for the ocean – or at least for that oh-so-convenient little beach!  We all came back and spent the evening in the outdoor cinema before crashing around midnight. Some obviously stayed up much later than that, singing and dancing and partying and having a blast!  I was out quickly…! I was hoping for another beach day today, it turned out to be overcast with lots of rain, which is cooling us all down! – It was much needed. 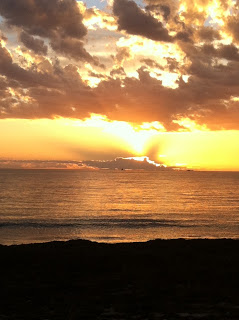 Today I met up with Lisa in town, and the two of us met her boyfriend’s sister Angela for her lunch break.  Angela is an absolute gem.  Lisa and I are currently sitting in a café called “Break” having just that! – A Break! She’s knitting something beautiful, and I’m writing to all of my favourites!

Not much else to report at this point, but I am getting rather excited about my travels to the Gold Coast!  I fly out of Perth on Monday night, just before midnight, arriving in the Gold Coast airport around 6am.  I will be sure to keep you all updated with those adventures!