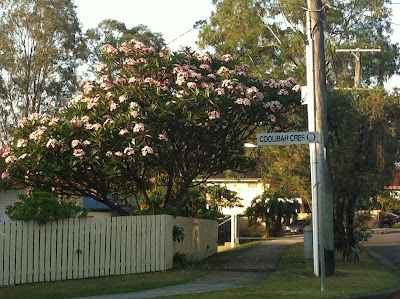 Already into my time house sitting on the Gold Coast, and it’s going really well!  Here’s a catch up on where I’m at these days. 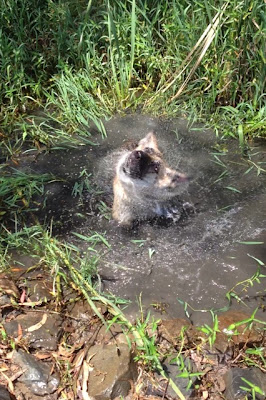 I got back from Noosa on December 14, in the evening.  Trish made us an awesome chicken stir fry and we watched a movie that night.  Ron and Trish just moved into this house two weekends ago, and are still working hard to unpack their things, reorganize their new home, and clean up the back yard.  The yard was overgrown with thick jungly vegetation.  They had it cleaned up, and the old dead plants and trees removed, to make it a functional back yard.  The landscapers, if you could call them that, left a rather large mess behind, and it has kept Ron and Trish busy since! 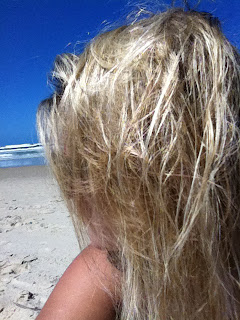 On Saturday, Ron and I took Athena for a walk in the morning.  He showed me where the bus/train station is in relation to the house, and where a good walk for Athena is.  Athena is their German Shepherd, and she is such a pleasant and well natured dog!  I am thoroughly enjoying her company.  Both Athena and Destiny (the cat) have such personalities!  Athena is so gentle natured and sweet, and Destiny is definitely the dominant of the two!  She’s such a little talker, and they keep me from being even slightly lonely in this house!  I spent some time on Saturday afternoon at the Burleigh Heads beach on the coast.  The coastal beaches here really do go on and on and on!  It’s breathtaking.  I found myself just sitting and watching and listening to the sounds of the birds and people, and the waves rolling into each other, and breaking as they hit shore.  Just stunning.  Stretching as far as I could see to the left, stands the skyline of Surfers Paradise, and to the right, Burleigh Heads rainforest, hills and walking trails.  Between the two stretches a beach of white sand alive with people, seashells and rolling aqua waves breaking as they reach the sand.  They crawl up the beach far enough to bring new seashells to those scouring the beach to find the perfect souvenir of the Gold Coast.  I am going to thoroughly enjoy my time here! 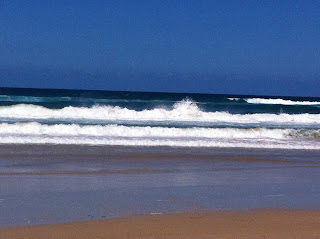 Ron took Trish and I out for dinner that night, for a Chinese food buffet!  On our walk down the street, we saw a few bats flying around, feasting on the flies and bugs.  I am not kidding, the bats here are HUGE.  The size of my forearm plus their wide wingspans!  I had a laugh to myself to see one actually flap it’s wings, since at home, as I recall, if you see a bat, it’s like a dart in the sky – you’re lucky to keep your eye on it for any length of time and it’s gone, or it’s flight pattern is so irregular you can hardly see them at all.  You’ll hear the occasional squeak or something, but rarely get a good look at them.  Not the ones here.  They could pick up a cat, I swear. 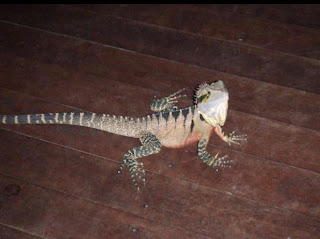 Ron and Trish left first thing Sunday morning.  I got up early with them and saw them off on their adventure.  The shuttle picked them up at precisely 6:50am and off they went!  Hong Kong, and then India for their holidays!  I have taken it upon myself to help out as best I can while Ron and Trish are traveling, since there is still a lot of work that needs to be done in the backyard.  Lots of raking and filling the wheelbarrow to clear out the roots, vines, leaves, twigs and branches that were left behind.  I got a good head start that morning before it got too hot, and then unpacked and turned the house into “my home” for my stay, unpacking and reorganizing my groceries.  It’s nice to have your clothes hung up or in drawers instead of pulling them out of a backpack daily! 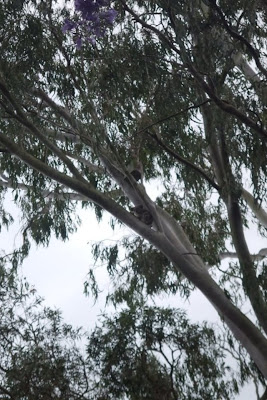 I’ve been walking Athena for 30-45 minutes, twice a day, allowing her to enjoy every pond or swamp she finds.  Ron and Trish used to live within walking distance of the ocean here, and Athena LOVES water.  I think she’s missing the ocean, but you’d never know sometimes, the way she leaps into the swamps and ponds!  She makes me laugh every day.


Walking Athena has allowed me to really admire the flowers and vegetation here.  Mango trees, hibiscuses, gum trees, and various other gorgeous flowers.  It has also introduced me to several different kinds of birds and sounds, which are so captivating!  I’m not kidding, I demolished a bag of popcorn watching the cockatoos in the backyard enjoy the seeds Ron left out for them!  At one point, there were sixteen of them in the tree.  You should hear these birds squawk.  They can sound so angry!  The big ones with the black beaks I’ve seen would be 1.5-2 feet tall. 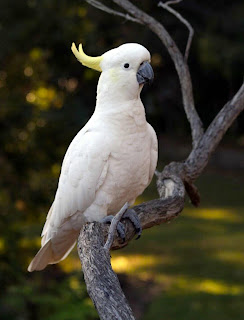 My favourites though, are the rainbow lorikeets.  Their colours are beautiful, and they are quite the little characters.  I haven’t seen a kookaburra yet, but am determined to find one! If you haven’t ever heard a kookaburra – click here! (http://www.youtube.com/watch?v=Fc_-icFHwQo) I get to hear this every day.  I’m so incredibly fortunate!


(HAVE A CLOSE LOOK AT THE GUM TREE PICTURE! What's looking down at you?!) 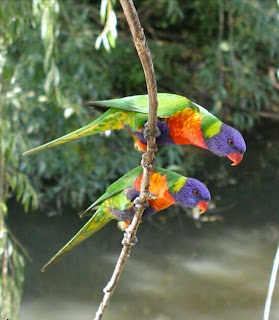 I took the bus to the Robina Town Centre, which is about a 15 minute bus ride from here.  I would equate this shopping centre with Vaughan Mills – it’s huge and has everything!  It was swarming with people, as I’m sure all malls are at this time of year.  There’s a post office there too, where I sent some more Christmas cards.  The line started about 8 meters outside of the entrance!  Also a busy spot at this time of year!  I picked up what’s called a Go Card for transit – apparently saves you money using public transit!  You scan when you get on and off public transit… makes me feel like a local! Haha! Talk about feeling local… I had to call the transit customer service line to find out about particular rates for the train and bus, and had to state which suburb I was in: Varsity Lakes.  I tried three times to say it, as I normally would – but the automated machine couldn’t understand.  I figured for my fourth go, I’d wing it and try my best Australian accent.  It worked!  I had to laugh! Toooo funny.

Wednesday night, there was a wild thunderstorm.  There wasn’t more than 10mm of rain that fell, but the thunder and lightning lasted for hours!  What a light show! Fork lightning that divided the sky into dozens of jagged puzzle pieces!  It was spectacular! 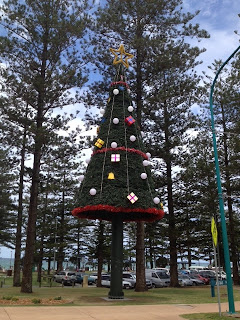 Went to the beach again today, but it turned sour after being there for about an hour, so I bussed back to the terminal here and then walked home in the spitting rain.  It ended up being a perfect afternoon for a few episodes of Grey’s Anatomy!  Ron taught in China for nearly eight years, and over that time there, collected tons of DVDs and TV series.  I never really watched tv after highschool, and never got into series shows.  I admit, I was sucked in to a few seasons of survivor, but that’s really it.  Oh, and Dexter, but I don’t have to be ashamed about that – it’s a fantastic show!  So, when it rains here, or before bed, I watch a few episodes of Grey’s Anatomy, and I really like it!  No I understand why some of my girlfriends in university would have “Grey’s Girls Nights” on Thursdays (and would often come home either in tears or raging about the events of the episode!).  Love it. 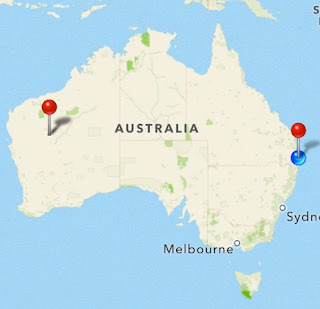 So, five days until Christmas.  I am having a hard time getting into the Christmas spirit with the heat and lack of decorations and snow!  It’s just not the same, but I’m doing my best, even if it’s a struggle, to wish everyone I come across a Merry Christmas!  It’s going to be different spending it alone – although at 7pm on Christmas evening, I have some company arriving!  “Handsome Alex” from the Fremantle hostel, the one that showed me the article about the man who traveled the world without an airplane, is spending his holidays with me!  I am really excited.  We’ve been in touch since he headed back to the mines after we met, and will be here for two weeks.  We’ve got all kinds of things lined up for his time here, and I’m thrilled he’s coming over!  Check out the map – red pin on the left is Alex, red pin on the right is me.  Five days until they’re the same location pin!

I will hopefully write again soon!  I am sending my biggest, warmest, most loving holiday wishes to everyone back home!  Miss you and love you all!  Going to be a tough one to be away for, being Kinley’s first Christmas – but that’s why we have skype and phones, right? … right? 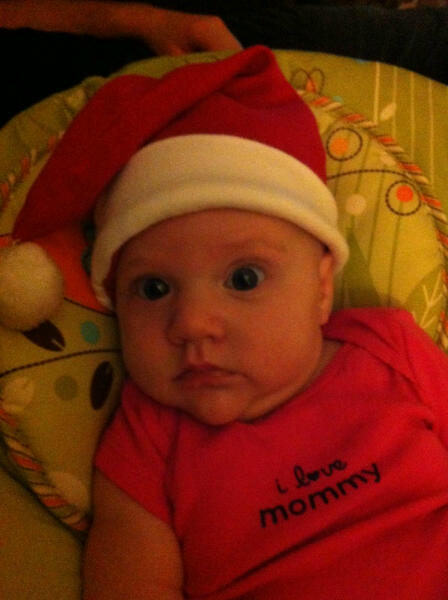