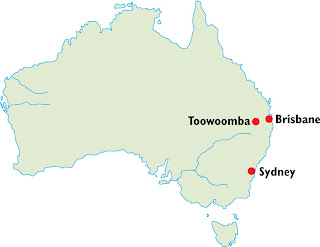 A little bit about Toowoomba for people like my Dad! :) Toowoomba is located 130km west of Brisbane in the state of Queensland.  There are roughly 132 000 people living in the smaller suburbs that make up the Toowoomba region.  It is the largest inland city in Australia, and has over 150 well maintained public parks and gardens!  Toowoomba is situated on the Great Dividing Range (the mountain range in eastern Australia), and has some of the most gorgeous natural lookouts and views I've ever seen! ... Anyways.  Moving on.

Today marks one week in Toowoomba, with the Girdler family.  How did I ever get so lucky?  I have not only been welcomed and accepted, but made to feel like a family member, and I love it.  It is such a terrific thing to experience while traveling, and living around Australia.  I have come to realize that I'm really not much of a "backpacker" as much as I'm a traveler who lives in one place for a few weeks then goes elsewhere!  Other backpackers I've met are always on the go, staying in one place for a few days of adventure, then continuing on.  I've summed up my nearly three months here with 10+ day stays in each location, besides my two five day stays in Noosa!  I wouldn't change a thing so far.  Every person I've met, every city I've been to, and every memory I've created has put me where I'm at right now, and I will gladly keep riding this roller coaster of life in Australia!  Everything seems to be working out so organically, I can't help but let it roll on, and I'm excited every day to see what comes next! 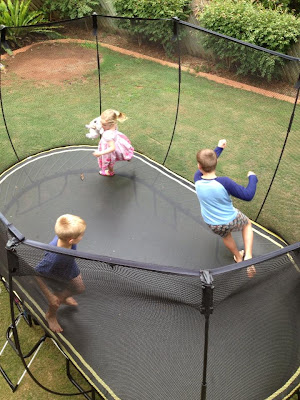 This week allowed me to settle in with my new family, and gave the three kids times to adjust to my presence.  We did something exciting nearly every day, including building forts (which were up all week and slept in too!), jumping on the trampoline and playing in the sprinkler (a nice way to cool down when it's nearly 40 degrees!), a picnic in the park with scooter rides, making dinners with the kids, a trip to the local outdoor pool, Ava's fourth birthday, and a barbecue! 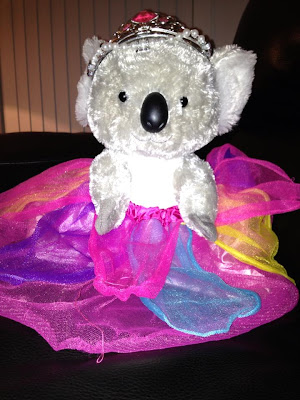 An element of hilarity and excitement for the kids is the latest addition to my travel bag, "Big Head."  The story behind Big Head goes as follows... when Alex and I visited Phil and Nicole in Tweed a few weeks ago, we told them about our then up and coming trip to the Steve Irwin Zoo.  Phil suggested to their son Max, that he show Alex and I what he got to bring home from the zoo.  Max showed Alex and I a stuffed koala, that Max called Buster.  Buster spent the evening with us on the table, and needed to be stood back up several times, since he was continuously falling over, due to his over-sized head.  Phil and Nicole told us how they call him "Big Head," but have to do so in a joking manner, because Max really didn't think it was as funny as they did.  After Alex and I had spent the day at the zoo, we popped in to the gift shop to pick up a few things.  I was after something I could send home to Allison (obviously, since it was her dream to be there!), and something for Kinley.  Oddly enough, Max's koala Big Head didn't even cross my mind as I scoured the stuffed animal wall looking for the best, squishiest, and softest most perfect stuffed animal for my little Martian... until I saw them. a Mini army of them, stuck in the corner!  The decision was made.  Kinley was getting her very own Big Head!  He was without a doubt, the best, squishiest, and softest most perfect little dude!  I found the one with the most characteristic face, and took him to the counter.  I thought about sending Big Head home immediately, or allowing him to see Australia before sending him home.  When I learned it was going to cost me nearly $50 to send him home, the decision was made!  He needed to travel before going home.  So far, Big Head has been to Brisbane, Noosa, and Toowoomba.   Better than that, though, Big Head has drawn pictures, jumped on a trampoline, been on the train, a Greyhound bus, has gone to the beach, has been a princess and worn a tutu, slept in a fort, ridden in a stroller, ridden a scooter, danced to Crazy Frog, has gone shopping, made cookies, and played Wii!  Most importantly, he has become an integral member of the Girdler family, and has made it quite clear to me that as much as he'd love to meet Kinley, he needs to stay here.  He has suggested I buy one of his siblings from the zoo, and grant them the happiness of a perfect family to live with and be loved by, since this Big Head has found his in Toowoomba!  There's no way in hell I can take this koala away from these kids, especially Ava, who has him with her at all times!  It's really sweet.  I wouldn't put up a stink about going to the zoo again though, in order to get another Big Head! :)

Age is just a number, and this statement is so true when it comes to company and friendship.  I've truly found a friend in Rachel, and really enjoy her company.  I don't see much of Dave, since he's up and gone by the time I wake up, and isn't home until dinner time.  He's hilarious, and is a really genuinely nice man.  This week, I got to spend my days with Rachel and the kids, and it's been great!  There hasn't been a day go by so far that I haven't laughed and smiled, or had a meaningful conversation.  The kids always have me joking around with them, and involved in their fun.  Ava and I have spent a lot of time colouring in the last few days, since it's one of her favourite things to do, and is one of my favourite ways to wind down and relax!  She melted my heart yesterday when she asked me, "is your Dad handsome?" ... What a sweetheart!  Through the lump in my throat, I squeaked out, "yes he is!"  I can't say enough good things about this family.  Kids will be kids, of course. But they are so polite, so well raised, and a real treat to be around!  This week is the last full week of summer holidays for the kids.  Lots of activities lined up for the next week, including finding a job.  I'm feeling very optimistic about it!

Below: My Toowoomba Family! 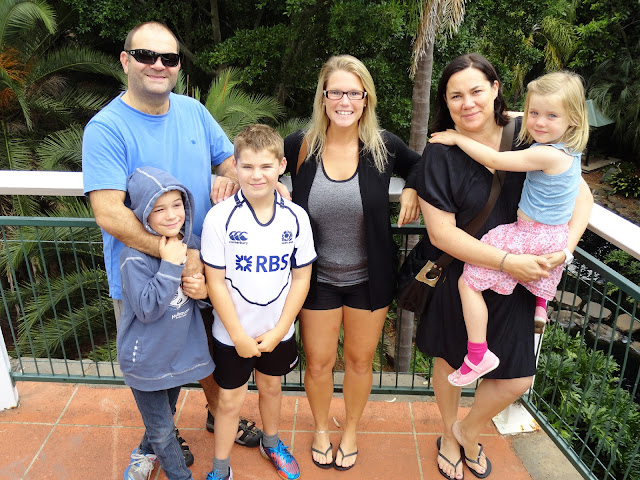